The phenomenal rise in popularity of online retail has seen the courier business change on a seismic scale- and SMS messaging has found itself at the heart of the industry’s transformation into a customer service led model where survival means delivering more than just the goods.

Royal Mail – the rise and fall of a monopoly

There was a time when the entire mail and parcel network was monopolised by a single organisation – Royal Mail. The Royal Mail service was first made available to the public by Charles I on 31 July 1635, with postage being paid by the recipient. Oliver Cromwell’s government was quick to recognise the financial value that a monopoly on the post of the nation and Commonwealth could offer and passed laws to ensure that the network would be unchallenged.

In 1660, following years of civil war, the General Post Office was established by Charles II. Britain’s postal network quickly expanded, with the introduction of first mail coaches and later mail trains connecting every end of the country.

Under the Post Office Act 1969, the General Post Office was changed from a government department to a statutory corporation, known simply as the Post Office. The office of Postmaster General was abolished and replaced with the positions of chairman and chief executive in the new company.

On 1 January 2006, the Royal Mail lost its 350-year monopoly and the British postal market became fully open to competition.Competitors were allowed to collect and sort mail and pass it to Royal Mail for delivery, a service known as downstream access. Royal Mail introduced pricing in proportion (PiP) for first and second class inland mail, whereby prices are affected by the size as well a the weight of items.

While the courier industry had evolved quite separately from the mail service, this was nonetheless a pivotal moment that changed the entire landscape  of the UK’s postal and delivery sector.

Whilst the delivery of letters had been under a monopoly for some 350 years, the courier service had evolved quite separately – but not without it’s own problems. Despite being a free market, by around the year 2000 the UK courier market was dominated by just a handful of firms – DHL, Royal Mail’s Parcel Force, UPS and TNT being the most established at the time.

As Royal Mail embarked upon its journey into privatisation, public trust fell to an all time low, giving other players an advantage.

With the big few holding such a grip on the market, profit often took precedence over customer service. Price competition became the deciding factor in winning custom and provided the goods arrived in the right place, at the right time and in the right condition, customers tended to accept things as they were. It was the subsequent onset of online retail that really shook things up.

Ebay, Amazon and the online effect

In 1999, the online auction and shipping website that had seen phenomenal success in the USA launched to a worldwide market including the UK. The dot-com bubble was at its height, and consumers had discovered a whole new way to shop. Almost overnight, the volume of domestic parcels rose to unprecedented levels.

At the same time, another company was also slowly transforming the online shopping experience – Amazon. The UK website had launched in 1998, but took time to take off – partly due to the slow and steady strategy the company had adopted. Despite the dot-com bubble bursting dramatically, Amazon continued to be a success, and began to see sustained growth leading to it becoming the online retail giant it is today.

With the rise of online retail, domestic customers began to demand more of couriers. Not only did they want cheap delivery – they wanted to receive a satisfactory service and receive help when things didn’t go a planned. Increasingly, customers also wanted to have access to information such as where theur parcel was and when it would be delivered. Initially, such information was typically provided by email. Smart companies were quick to see, however that the rising popularity of SMS messaging offered a whole new approach to managing the customer experience. Customers wanted information at their fingertips and text messaging provided the perfect solution.

For courier companies, the key to successfully using SMS messaging lies in understanding the delivery cycle as well as customer behaviours. Firstly, customers increasingly want to know the real-time progress of their consignment. In addition, they want to have more flexibility over when they receive their goods and the ability to make real-time changes to the delivery instructions.

Some simple SMS strategies that have been used to great effect by leading companies include.

At the heart of all these strategies is the adoption of a customer centred approach. Rather than the traditional model in which the courier dictates the delivery, SMS messaging has introduced  a sense of real time control to customers, improving the experience and leading to improved perception of companies which use SMS messaging wisely.

One particular element of a great SMS approach is to stay one step ahead of the customer – so that they know the progress of their delivery at every stage before they even have a chance to ask. This way, you will enhance the customer experience in a way that leaves the the customer feeling that you have exceeded their expectations.

The introduction of the driver’s name helps to add a personal and human factor to what used to be seen as faceless entities. Inviting feedback also demonstrates that the company values the customer experience. All of these contribute to building brand reputation. In an industry that is increasingly reliant on recommendations, it is easy to see how a well thought out approach to SMS messaging can pay dividends.

Are you looking for a bulk messaging solution for your courier company that integrates with all the leading CRM platforms? Talk to the experts here at the award-winning Fastsms and see why we are rated number one for customer service.

Our experienced team is never more than a phone call or email away. Call now on 0800 954 5305 to learn how you too can take your customer service to the next level with our bulk SMS messaging service. 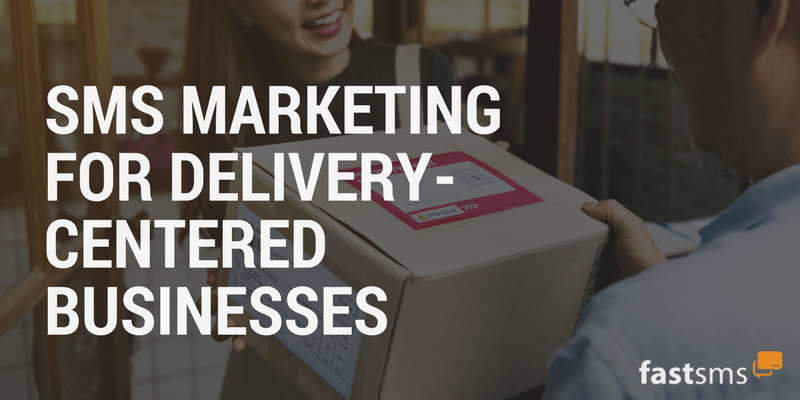 If you run a delivery-based business, you'll know that communication with your customer is key. Whether it's keeping them informed about their delivery's status and expected arrival time, or tempting them with discounts and offers on future orders, there are plenty of reasons to keep in touch. But a key communications challenge in the digital age is choosing the appropriate channel to use to get your message across. Forms of marketing like emails and phone calls are still forces to be reckoned with, but the success of many communications from delivery-based businesses rely on near-instantaneous reading. That's where SMS marketing comes in. 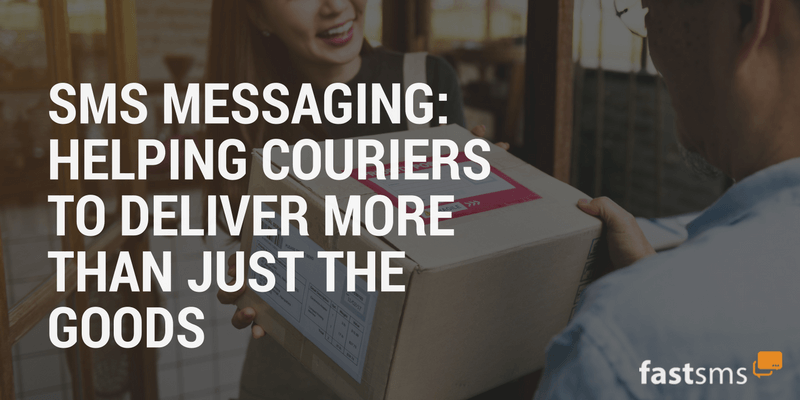 The phenomenal rise in popularity of online retail has seen the courier business change on a seismic scale. In this article, we look at how SMS messaging has found itself at the heart of the industry’s transformation into a customer service led model where survival means delivering more than just the goods. Read on to discover some simple SMS techniques to improve your customer relations and brand image.