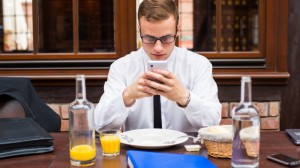 Short Message Service (SMS) is a communication service standardised in the GSM mobile communication system, that uses standardised communications protocols to allow the interchange of short text messages between mobile phone devices, fax machines, and/or IP addresses. Originally designed as a commissioning tool for mobile network technicians it has become a dominant force in both personal and business communications.

It is a store and forward way of transmitting messages to and from mobiles. The message (text only) from the sending mobile is stored in a central short message centre (SMSC) which then forwards it to the destination mobile. This means that in the case that the recipient is not available, the short message is stored and can be sent later.

Messages must be no longer than 160 alphanumeric characters (on a 7-bit mode, though some services use 5-bit mode, which supports 224 characters) and contain no images or graphics (see MMS). Most mobile networks and most handsets can receive messages of up to 456 characters by taking three “linked” or “concatenated” messages and joining them at the handset back into a single message. The limit here is 456 characters rather 480 (3 messages worth) because some characters are used to provide the linking between the messages.

Although services based on SMS have been feasible for many years, the recent mobile phone penetration and large scale adoption of the existing services by users, have made the SMS based services even more attractive to service providers. SMS text messaging is the most widely used data application on the planet, with 2.4 billion active users, or 74% of all mobile phone subscribers sending and receiving text messages on their phones.