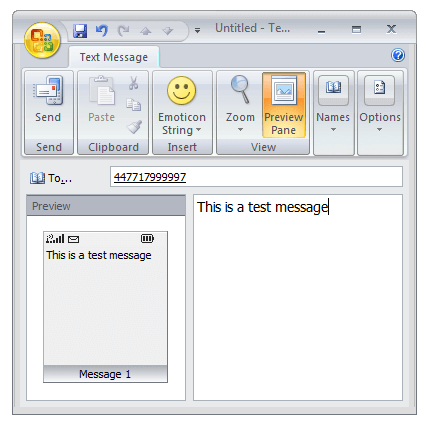 Outlook Mobile Service (OMS) is a feature of Microsoft Office Outlook 2007 and 2010. It allows users to send SMS messages through Outlook, just the same way they send email messages. The way it works is the user tells Outlook to send the message they’ve written as an SMS message. Next, Outlook uses OMS to connect to an SMS provider that the user specifies in the settings. OMS then converts the message into the proper SMS format and forwards it to the SMS provider.

The recipient receives a typical looking SMS message on their mobile phone. They can send a reply, which can be sent to the users Outlook Inbox or a mobile phone depending how they set their preferences.

When using OMS, users could send messages as SMS and email at the same time by including either an email or a mobile number in the address field. Users could also set up the service to forward their emails and calendar appointment reminders to a mobile phone when they were not in the office or using Outlook.

Microsoft, however, discontinued support for OMS starting with Outlook 2013. The service still works with 2007 and 2010 versions. The deprecation of OMS was not received well. The Microsoft support forums were filled with comments from people who had to either stay with 2010, or roll back from 2013 because the service no longer worked.

In the years since Outlook 2013 was launched, Microsoft has not given in to the requests to add OMS back into Outlook. Instead, they encouraged users to find add-ins or to connect with third parties that can support the feature.

To help our customers in this situation, we provide Email to SMS to replace Outlook Mobile Service. It works with Outlook and any email client that supports SMTP email protocol.