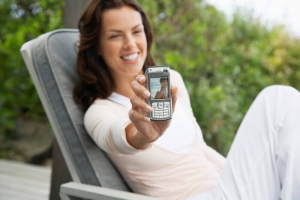 General packet radio service (GPRS) is an extension of Global System for Mobile communications (GSM). GSM is usually referred to as the 2G network. After GPRS was added, the new capability was sometimes called 2.5G.

GPRS is technically different to GSM, while still being part of a compatible standard. In their simplest form, GSM provides voice services and GPRS provides data services. This is because of how they are designed and implemented.

For voice calls, the line or connection is reserved as long as you’re talking (similar to landlines). This is because GSM is “circuit switched”. The channel is either open or closed, in use or not. Users paid for the time they used on the connection, usually by the minute.

GPRS though, is packet switched. It works the way most Internet connections work. It takes data that needs to be sent, breaks it up into small pieces called packets, and then sends them across the network. Those packets are what count toward “data usage” on mobile plans.

When it was first deployed, GPRS only allowed tens of kilobits to be processed at a time (in practice, though theoretical limits were higher). Users could access limited services on the internet such as text email or images that weren’t too large. The advantage though, was that while they were still always connected, they only had to pay for the data they used. This concept is familiar today, even though the amount of data transferred can be much larger than when GPRS started thanks to advances into 3G and 4G networks.

GPRS also made multimedia messaging services (MMSs) possible. Because it is packet based it can handle the audio, video, or images included in those message types. It also improved upon GSM’s native capability to handle SMS messaging by increasing the number of messages processed at one time.